Meditation, Neurofeedback, and Brain Training are the key to stress relief

Research conducted in London by psychobiologist Maxwell Cade, a member of the Royal Society of Medicine, gave a scientific basis for meditation and made possible the development of neurofeedback. In the 1970s Dr. Cade has created his own EEG-Neurofeedback equipment (MindMirror) and conducted extensive research with swamis, yogis and Buddhist monks, finding out what was happening in the physiology of their brains at the time of meditation. Dr. Cade opened the way to improve the process and explained scientifically what had previously been understood only in a spiritual interpretation. His book about this research, “The Awakened Mind”, 1979, is quite impressive even today.

With the advancement of brain high-resolution magnetic resonance imaging technology, new studies have been done showing that the effects of meditation go far beyond what might be initially believed. Increased gray matter in the frontal cortex in areas related to memory and decision-making is especially important because it is widely documented the fact that the cortex decreases in size with the aging of the individual – and the brain begins to lose some of its functional abilities. It was found that people who meditated and were in their 50’s had the same portion of gray matter in the prefrontal cortex as people in their 20’s. 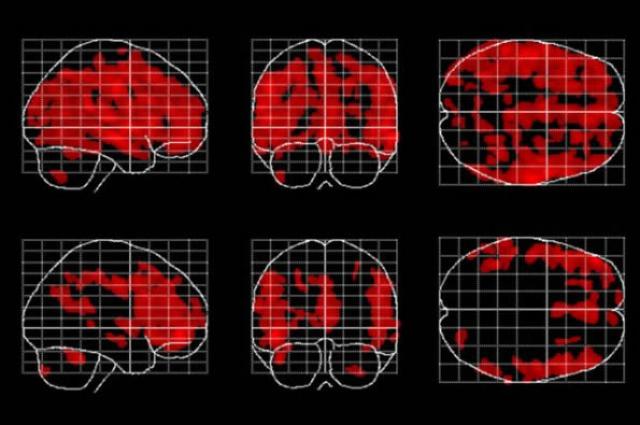 Areas of the brain affected by aging (in red) are fewer and less widespread in people who meditate, bottom row, than in people who don’t meditate. Courtesy of Dr. Eileen Luders / UCLA

By comparing the brains of meditators with a control group, a difference in five areas of the brain was found. In four of them, there was an increase of volume:

1. The primary difference, we found in the posterior cingulate, which is involved in mind wandering, and self relevance.
2. The left hippocampus, which assists in learning, cognition, memory and emotional regulation.
3. The temporo parietal junction, or TPJ, which is associated with perspective taking, empathy and compassion.
4. An area of the brain stem called the Pons, where a lot of regulatory neurotransmitters are produced.

The amygdala, the fight or flight part of the brain which is important for anxiety, fear and stress in general, it got smaller in the group that went through the mindfulness-based stress reduction program*. The change in the amygdala was also correlated to a reduction in stress levels.

How stress is, literally, destroying your brain

The harmful effects of stress on the brain are known since 1991, caused mainly by cortisol and adrenaline. These stress-related hormones affect not only the cerebral functions, but also change the physical structure of the brain.

The stress hormone cortisol can kill, shrink, and stop the generation of new neurons in a portion of the brain called the hippocampus*. The hippocampus is critical for learning, memory and emotional regulation, as well as shutting off the stress response after a stressful event is over: all much-needed processes in both our professional and personal lives.

Chronic stress can also shrink the medial prefrontal cortex*. This negatively affects decision-making, working memory, and control of impulsive behavior. Stress also has the ability to affect neural stem cells, inhibiting access to the prefrontal cortex, where we plan complex cognitive behavior and moderate social interaction. The result is a brain that is less capable of learning and make new memories, and more prone to anxiety and depression.

These brain alterations can have significant consequences on the way we interact with others, our ability to learn, remember, make decisions and accomplish long-term goals. They also make it more difficult to successfully manage stressful situations in the future, leading to a vicious cycle

Dr. Cade, after more than 4,500 recorded electroencephalograms, could identify the Alpha state as the core of meditation. When one measures brain waves of a person who is in this meditative state, but mentally focused, the monitor shows a slow Alpha wave around 7 Hz.

In the book The Awakened Mind, Dr. Cade concludes “To achieve an Alpha frequency of 9 Hz requires two to five years of meditation experience. With ten to twenty years of practice, we find the Alpha frequency around 7 Hz.” This conclusion is reinforced by the research of Michael Hutchison, who states that “Only those Zen monks who have meditated for more than 20 years are able to enter the Alpha (7Hz) – Theta (3Hz) states at will.”

Brainwave III achieves within days what has previously been believed to require 10 to 20 years.

The Brainwave Station is composed of an EEG-Neurofeedback module (EEG equipment which, connected to a computer, records the brain frequencies in real time and assists the training) and an optical-acoustic stimulus module (which connected to another computer, implements in the brain the desired frequencies). This equipment is delivered to the client.

The basic process follows these steps, always with EEG analysis in real time:

In addition, according to the case of each client, a number of other demands can be achieved, such as ADHD and Dyslexia solution, increased academic or art performance, disorders resulting from birth problems, solution of fibromyalgia and reduction of symptoms related to autism spectrum.

After the course, the customer relies on the ongoing remote supervision from the Alphalearning International for as long as necessary to master EEGs readings and operate with confidence the neurofeedback and optical-acoustic stimulus software. In addition, an agenda that fully develops the clients may take months of your life and we are keen to monitor the implementation of these goals.